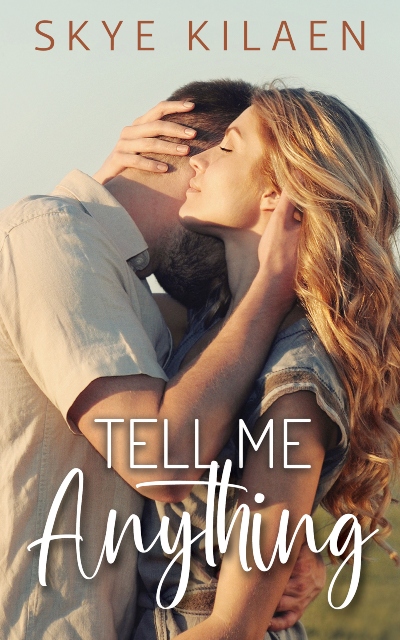 Isabel meets Derek at exactly the wrong time… or is it exactly right?

Can Isabel return this year for a refund? Because it sucks. Her editing business would be paying her bills just fine… if her ex-boyfriend wasn’t blackmailing her. Of course, if her conservative family wouldn’t disown her for being bisexual, her ex couldn’t blackmail her in the first place. Sadly, she hasn’t invented time travel to un-make the mistake that created this mess.

Derek has a good life. Mostly. He’s an out bisexual man with a successful business and a loving queer found family. But he’s almost forty, living alone is getting stale, and yet dating seems pointless since nobody’s ever found him exciting enough to build a life with. Given he’s now doing zero-creativity craft kits to pass the time, he suspects they’re right. Maybe he should get a dog.

Find out more, read a preview, & view content warnings for Tell Me Anything.

The Home I Find With You
Cover: Co-created by the author and jem zero

A polyamorous romance about building a new life after the world falls apart.

Life in rural Colorado after the second U.S. Civil War is perilous. Van and his girlfriend Hadas only recovered from the attack that killed Van’s wife because their community helped them heal. The warmth Van and Hadas share isn’t the love he lost, but it’s precious. He’s content.

Clark survived the war, but his family fractured and now his relationships are in ruins… which must be his fault, or everyone wouldn’t say so. Figuring he can’t destroy ties he doesn’t create, he relocates to start over, zero interpersonal complications welcome.

Find out more, read a preview, & view content warnings for The Home I Find With You.

Get It Right (Love at Knockdown #1)
Cover Artist: Laya Rose

A butch lesbian parolee. The pretty pansexual nurse who got away. Is this their second chance at a happily ever after?

Finn is finally out of prison, which is great. Having no job, no car, and no place to sleep except her cousin’s couch? Not so great. Plus, her felony theft conviction isn’t doing wonders for her employment prospects, so she can’t afford her migraine meds without the public clinic.

The last thing she ever expected was for the gal who stole her heart to come walking down that clinic’s hallway: Vivi, the manicure-loving nurse who spent two years fighting the prison system to get proper medical care for her patients, including Finn.

Finn could never believe she imagined the attraction and affection between them. But acting on that in prison, especially as nurse and patient, had been a serious No Way. She’s had eight months to get over Vivi, who abruptly left her job without saying goodbye. Finn is over it. Honest! It’s totally and completely fine.

Find out more, read a preview, & view content warnings for Get It Right.

Knock Me Down (A Love at Knockdown Story)
Available FREE via newsletter subscription!

Can true love happen after thirty-five? Absolutely, but you might need to fall on your ass to find it.

When Will Strauss went out to hear a band, he didn’t expect to get knocked down during a political argument. He also couldn’t have known that the (possible) greatest love of his life would arrive on the scene in the form of a gorgeous, charmingly grumpy brunette almost a head taller than his 5’4”. If only he’d gotten her number…

A second chance meeting and one very good date, though, just might be the beginning of something beautiful.

Knock Me Down is a short story featuring a pansexual guy falling head over heels, a straight gal who desperately needs a new career, more than one incident requiring first aid, and a guaranteed HEA.

Find out more & view content warnings for Knock Me Down.

The bodyguard is a traitor. The princess is her one true love. And the revolution is almost here.

Elsenna Hazen left spaceport security and ended up a royal bodyguard. She should have known better than to fall in love with a princess.

It’s been two years since one ill-advised kiss in the garden pulled them apart. With uprisings in the streets, the nervous princess transfers Elsenna back into her service. Her Highness has no idea Elsenna is leaking data to the revolutionaries bent on overthrowing the princess’s oppressive father.