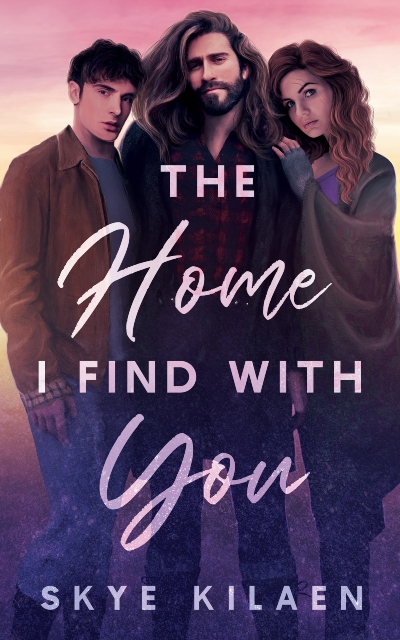 The Home I Find With You
Release Date: March 3, 2021
Cover: Co-created by the author and jem zero
Jump to content warnings
Kindle & KU
Goodreads
Reviewer? Join my ARC list

A polyamorous romance about building a new life after the world falls apart.

Life in rural Colorado after the second U.S. Civil War is perilous. Van and his girlfriend Hadas only recovered from the attack that killed Van’s wife because their community helped them heal. The warmth Van and Hadas share isn’t the love he lost, but it’s precious. He’s content.

Clark survived the war, but his family fractured and now his relationships are in ruins… which must be his fault, or everyone wouldn’t say so. Figuring he can’t destroy ties he doesn’t create, he relocates to start over, zero interpersonal complications welcome.

When Van and Clark meet, though, it’s nothing but complicated. Clark can’t stop wanting quiet, loyal Van no matter how the electricity between them misfires, and Van craves more than hookups from the charismatic newcomer. Hadas and others start coaxing Clark out of his emotional isolation, but when violence threatens the town, Van and Hadas must leave him behind to defend it.

To bring them safely home, Clark must decide whether Van’s love, Hadas’s friendship, and the belonging he’s found are enough to overcome his fear of once again letting down those he cares about.

The big bay door of the garage was down like usual. As Van and his team rode closer, though, a stranger stepped out of the side door.

What the hell? Van had his pistol out before he could think and Hadas trained her crossbow on them before they got two steps off the porch. Sudhir wasn’t far behind with his rifle. Strangers didn’t wander through town more than once or twice a year. No trucks had been scheduled to come through while Van’s team was gone and nobody around here liked surprises.

The stranger was probably a man, though of course you couldn’t know for sure until somebody told you who they were. Hadas and Sudhir waited for Van’s direction, keeping the guy covered as their mounts shifted uneasily. Where was Melina, the town mechanic? Van didn’t hear her clanking around inside.

The white, brown-haired, clean-shaven stranger raised his hands slowly. The unbuttoned cuffs of his red plaid flannel shirt slid down his forearms. He was lean and wiry, maybe a few inches shorter than Van. One of his neat dark eyebrows arched up. He was smiling at Van as if he wasn’t the least bit worried, though the slight hitch in his walk said he might not have gotten away from them even if Van’s team had been on foot.

Van really hoped the stranger wasn’t going to make them chase him down. Or shoot him. Hopefully the fact that he hadn’t taken off running was a good sign.

Melina came around from the back of the building in her blue work coveralls with an armful of scrap wood. She startled when she saw them and some of the wood tumbled to the ground. “Don’t shoot! Everybody, don’t shoot!”

The man might be a surprise but Van trusted Melina, so he gave a low word of approval for the others to stand down. The stranger eased his hands down and pushed them into the back pockets of his tight dusty jeans instead. He kept staring right at Van. He’d been staring at Van the whole time, not at the two people with weapons up. This guy had some kinda confidence, whoever he was.

As everyone dismounted, Melina put the rest of the wood down so she could shake tension out of her hands. Her brown hair was in two braids today, but as Van looked at her and back at the stranger, he realized their hair was the exact same color.

“You practically gave me a heart attack,” she said. “Where’s everybody else, is everything okay?”

Melina took a deep breath. “Okay. Good. Van, this is my son Clark. R-town brought their truck through early from Doberman yesterday and he rode with them. He’s going to stay. Clark, this is our defense team. Well, part of it, you remember I told you there’s six? This is Hadas Geller, she/her, and Sudhir Anand and Van, both he/him.”

Clark gave Van that half-smile again. “Thanks for taking care of my mother and the town.”

“Your mother’s the one taking care of us,” Hadas said, with a hard edge underneath from being rattled. Melina’s son was lucky she hadn’t put a bolt through his shoulder first and asked questions after. “Without her, no tractors. Anyway, Melina, we need the truck.”

Melina’s eyes narrowed. “You found something good? It better be good.”

“About fifteen miles away,” Sudhir said. “Through a burned area. The others are waiting so we want to get back quick.”

“You’re going to drive my truck through that?”

Sudhir stepped forward to give her a hug. “Miss Melina, you know I’m always nice to the truck. We’ll pack stuff out to it on the horses if we need to, I promise.” His voice shifted to a bit more coaxing. “There’s an unopened bottle of bourbon in Hadas’s saddlebag just for you, too. Hopefully it’s still good.”

If it was, she’d only sell it to keep the truck fueled, which helped the whole town, but Van figured sometimes it was nice to feel special. Melina stepped back from the hug with a happier face and beckoned Hadas inside with the saddlebags she’d already taken off her horse.

Van turned his attention back to Clark and found the man still looking at him, his rich brown eyes kind of sparking, as if he saw something he was interested in. Something or somebody.

The thought sent heat across Van’s face and gave him more than a passing vision of being on his knees. That want hadn’t happened for a long time. Wanting sex, sure, or a warm body next to his at night. That didn’t feel like this. Something about the way Clark stood, maybe? Or the way he’d rolled with the situation. He hadn’t been reckless when they’d aimed at him, hadn’t blustered or even twitched. He’d simply waited like he was curious to see what would happen next.

Clark’s thin nose might have been broken before, but if so somebody had set it okay. He held onto Van’s hand for a little longer than he needed to, as if he’d be the one to decide when he let go. Van felt warmer in the fall air.

“Van,” he said, since Clark seemed to be waiting for something. “No last name.” A good number of war orphans didn’t have them, but everyone knew who he was, so it didn’t matter. He’d been Irene’s man, and what she’d built before she died was the reason the four close small towns traded easily with each other and did business with Denver. The reason people went to bed at night feeling safe. Now Van kept that peace.

Sudhir cleared his throat and offered his own hand. “Welcome to Freshtown. Sorry about the, uh, threat of violence.”

Clark laughed and put his hand in Sudhir’s, but only for a brief shake. “No worries. I get how it is.”

Hadas came back outside holding up the truck key. She looked at Clark, then back at Van with some expression Van couldn’t read.

“Melina’s packing some food,” she said, real slow like she was thinking. “We can go trade the horses out if you want to wait here, Van? I need to get Zelpha from the farm anyway so she can ride in the truck.”

“Or I’ll wait here since I’m driving,” Sudhir countered, giving Hadas some other kind of look.

Van was too tired for all these looks to be flying around. He nodded and grabbed the reins of two of the horses, following Hadas as she led Daffodil down the shoulder of the crumbling highway.

I’ve tried to make these as spoiler-free as possible, but to me it’s more important to give full content information to those who need it. Despite the post-collapse setting, no animals are ever in danger, and there is no sexual assault and no threats thereof.

NOTE: These content warnings may be slightly updated no later than a week before publication. If in doubt, don’t pre-order!

Past events mentioned significantly & that have lasting effects on characters’ lives: